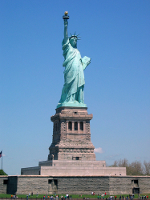 As the largest city in the United States, New York City is inevitably the place where a lot of things occurred for the first time. The New York Post is the oldest printed daily newspaper in the United States and was established in 1803. New York was also the first city to require cars to have license plates and was the first capital of the United States from 1789 to 1790. New York is also known for various landmarks throughout the city, the most famous, perhaps, being the Statue of Liberty. Lady Liberty was presented to the United States from the French on July 4, 1884 but it was not until 1886 that the statue was fully reconstructed in New York. The Statue of Liberty is 152 feet tall from base to torch and weighs 450,000 pounds. She also has a 35 foot waist and an 8 foot long index finger! When Ellis Island opened on January 1, 1892, the Statue of Liberty became more then just a gift from France. To many immigrants traveling to the United States the statue symbolized hope and welcomed them to their new life. From 1892 to 1924 12 million immigrants passed through Ellis Island to begin a new life in the United States.
What historical landmark is your city known for? Let us know!
Sources: http://www.statueofliberty.org/default_sol.htm
http://www.50states.com/facts/newyork.htm
Posted by Nancy at 8:25 AM