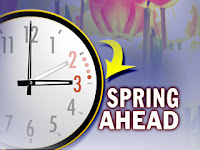 As many of you know, this Sunday, March 13, marks the beginning of Daylight Saving Time when many of us will set our clocks forward an hour. Almost all of us do so this time every year and set them back to Standard Time again in November, but why?
The idea for Daylight Saving Time was suggested in 1784 by Benjamin Franklin as a way to prolong summer days and give us more exposure to the sun. The United States did not officially begin practicing this idea until 1918 and even then it was not mandatory for every state to participate or to have the same beginning and ending date. As a result, different states would begin observing Daylight Saving Time at different times throughout the year causing chaos especially for travelers who were never quite sure what time they would be departing or arriving places. To remedy this problem in 1966, the Uniform Time Act was passed stating that for states that wanted to observe Daylight Saving Time, it would begin the last Sunday of April and end the last Sunday of October.
Since then the start and end dates have been altered slightly, but it is still mandatory that every state observing Daylight Saving Time start and end on the same day. It is not, however, mandatory that each state participate in this time change. As a result, Hawaii and Arizona operate on Standard Time throughout the year.
Sources: http://www.webexhibits.org/daylightsaving/index.html
http://www.infoplease.com/spot/daylight1.html
Posted by Nancy at 8:08 AM